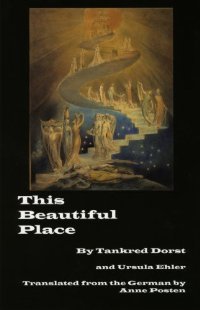 "This Beautiful Place is a lost classic found, as exciting as an unearthed treasure, testament or painting." –Hayden's Ferry Review

This Beautiful Place, by Tankred Dorst

ALEIJADINHO. In his thirtieth year, when he had already begun his greatest work, he discovered that he was afflicted with leprosy. He saw the white spots on his skin. He continued to work unfalteringly on the great stone sculpture until his fingers grew numb. The flesh began to disintegrate, holes and caverns formed. When both hands rotted off, he had his tools strapped to the stumps of his arms, the chisel on the left, the hammer on the right. In this way he could keep working. When his legs could no longer carry him, when finally legs and feet had rotted away, he bought a black slave, on whose shoulders he perched and continued to work. By this time he had formed a Mt. Calvary full of figures. He was now the most famous artist in Brazil. More and more people who admired his art came and wanted to watch how he carved beautiful figures out of stone blocks: saints and criminals, sufferers, soldiers, angels and animals. Because of his disfiguration people now called Aleijadinho: “the little cripple.” As his face was more and more devastated by the leprosy, as nose, lips, and ears rotted away, the onlookers were repulsed, because it reminded them of their mortality, and his sponsor wanted him to give up the work. But Aleijadinho had a leather sack made with two holes for his eyes, and he put this over his face. Finally the work was done, the Mt. Calvary completed. Its creator was nothing more than a pile of filth and stench. The pious and the admirers pushed the nauseating bundle on the steps aside. But his head cried out the glory of God, because God had let him complete his work.